Vickie and I were travelling across eastern Washington and happened upon a gem, Stehekin Washington on the north end of Lake Chelan.  We had a couple of days to spend before our next planned adventure, reservations to stay in a tree house on the flanks of Mount Rainier (next post).  On a whim, I decided we should drive to the city of Chelan, WA and I am glad we did.

We left Coeur d’Alene Idaho and headed west across the eastern part of Washington. We all have heard stories about the rain in Seattle and we know the Pacific Northwest is a temperate rain forest, but eastern Washington is nothing like that.  It is semi- arid.  Once we were outside of Spokane the landscape was treeless and virtually unpopulated.  It felt like we were driving through the middle of North Dakota.

The city of Chelan is a few miles off of the Columbia River Valley located on the very south end of Lake Chelan.  We checked with the ranger station in Chelan, a great resource for information, to see if there were any interesting hikes in the area.  We found out that the Lake Chelan was actually a gateway into the North Cascades National Park.  The only way to get there is via ferry or float plane.  We opted for the ferry and made reservations for ‘The Lady of the Lake’ to take us to the north end of Lake Chelan and the town of Stehekin (population 95.  Salute! ). 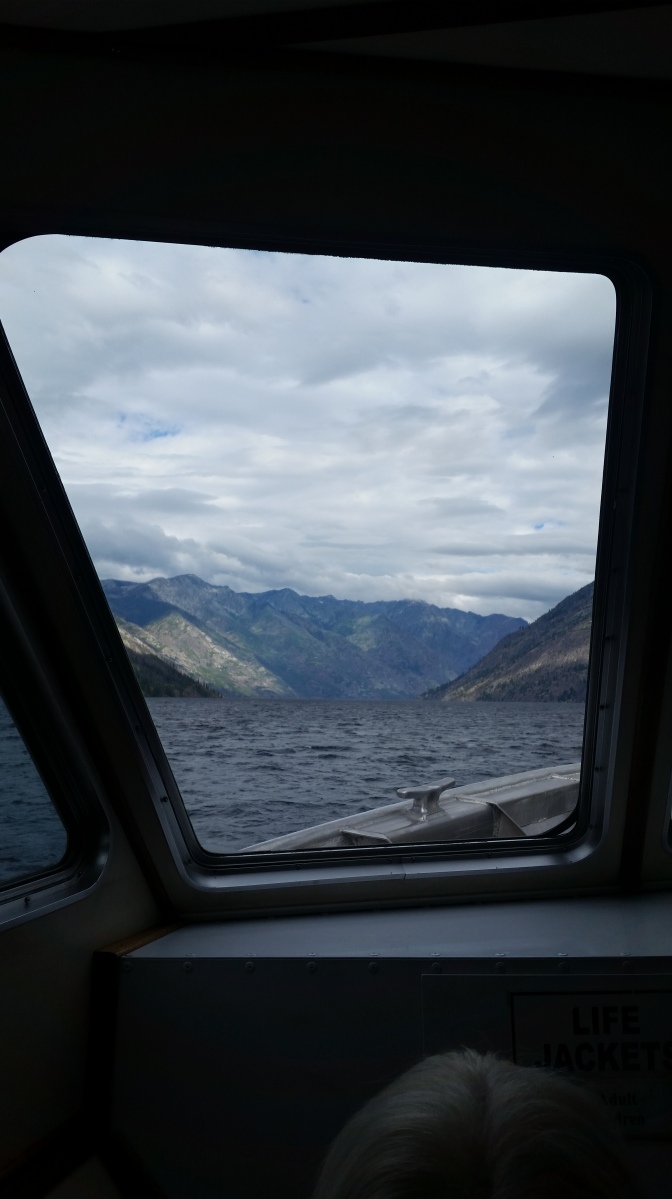 Lake Chelan is the technically a fiord.  The lake is 50 miles long and averages only a mile wide.  It is an amazingly clear lake and is the 3rd deepest lake in the United States at 1,486 feet deep.  (#1 Crater Lake, #2 Lake Tahoe, #4 Lake Superior…..thanks Google).  The strange thing about it is that it sits at around 1100 feet above sea level, which means that 386 feet of the lake is actually below sea level. 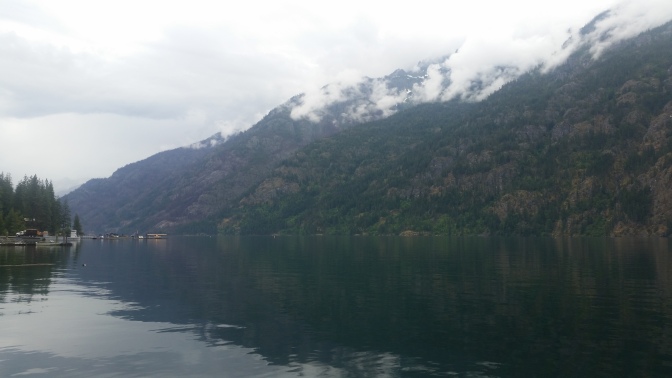 Upon arrival we checked in at the visitor center to try and get a campsite.  We were in luck, there were still two sites left at the Purple Point campground just north of town.   We found out later that the whole campground only has 5 sites.

The next day, we rented bikes ($30 a day) and went on a ride figuring 11 miles shouldn’t take too long on a bike….wrong.  It was an 11 mile, all uphill, ride on loose washboard gravel road with my front brake stuck slightly on.  We finally, thankfully, arrived at the High Bridge crossing the Stehekin River which brought us to the border of the North Cascades National Park.

We happened upon a national park ranger there so we asked her to recommend a good short hike in the area.  We were in luck because she was an expert.  She had recently completed hiking every single trail in the park.  Although she informed us she had never even contemplated riding a bike all the way from Stehekin uphill on loose washboard gravel road to the High Bridge.  She also let us know that a shuttle bus runs 4 times a day all summer from Stehekin to the High Bridge to drop off and pick up hikers.  It even has a bike rack on the front.  The schedule was on the bulletin board next to the High Bridge for a mere $7 each way.  I thought to myself ‘that would have been good to know yesterday!’

The ranger suggested the Agnes Gorge trail, a 5 mile round trip.  We just needed to keep an eye on the time and we would be able to catch the last shuttle of the day back to Stehekin. 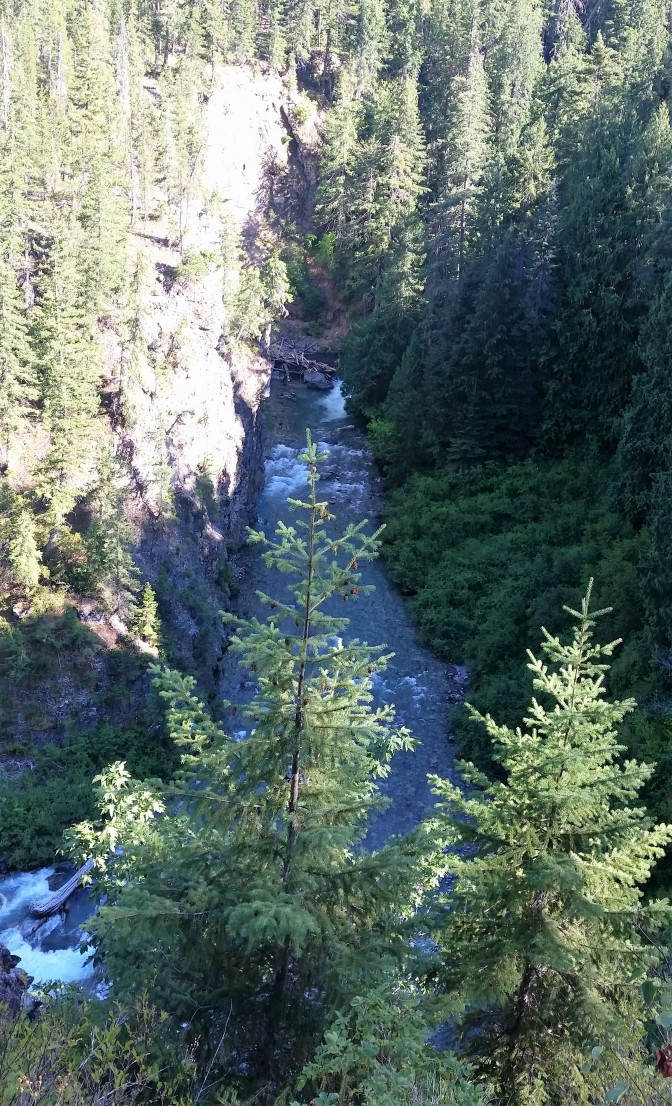 The hike was a beautiful stroll through mature rain forest following Agnes Creek.  We had views into the deep gorge surrounded by 8000 foot rugged peaks.  We walked under the forest’s conifer canopy and through the fern covered forest floor. 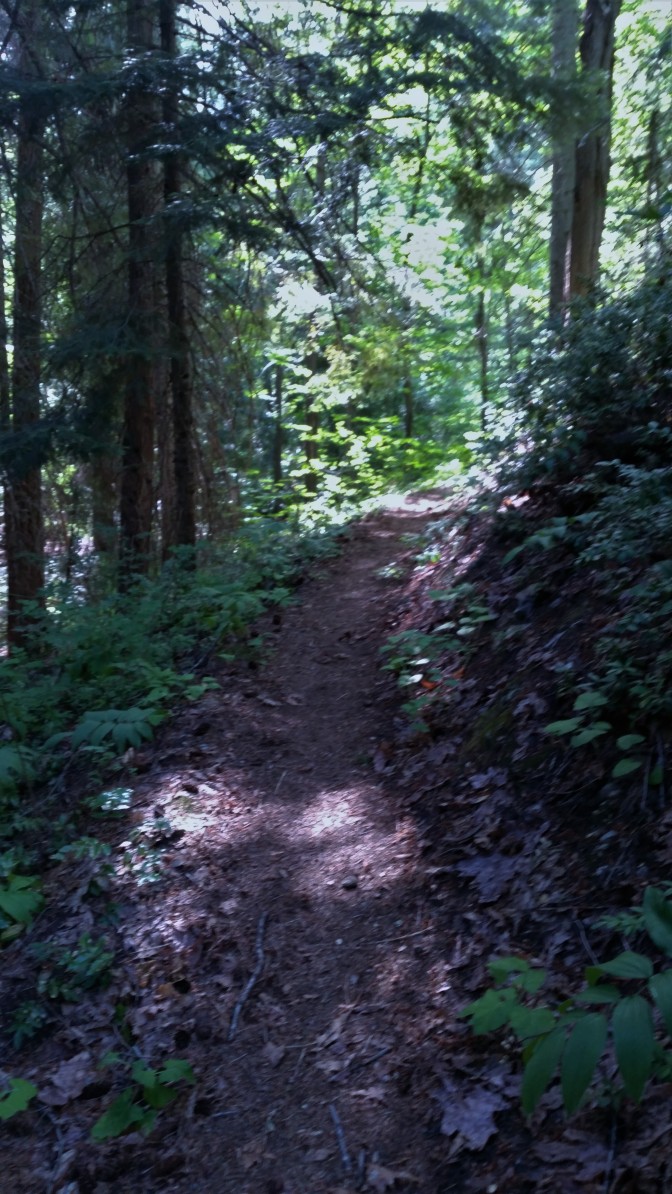 We passed through a hillside meadow that was filled with ripe Huckleberries.  We sampled a few berries and continued on.  About a half hour later we met a couple of women on their return trip.  They asked “Have you seen any bears?”

They informed us that bears had been recently spotted right on the trail.

Of course the next question was “Where on the trail?”

She said “in the Huckleberry patch”.

I thought to myself ‘that would have been good to know a half an hour ago!’

Vickie and I headed on to toward the end of the trail. I made a mental note to be alert on the return trip through the huckleberry patch.

Just before the turn around point we were rewarded with spectacular views of the rugged interior mountains of the North Cascades.  Even though it was mid July the mountains still held snow.  It felt like Vickie and I were Frodo & Samwise on a journey though the Mountains of Shadow on the way to Mordor.  (Sorry nerdy simile) 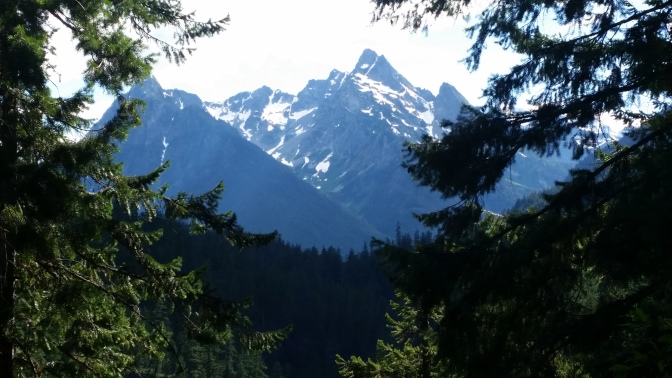 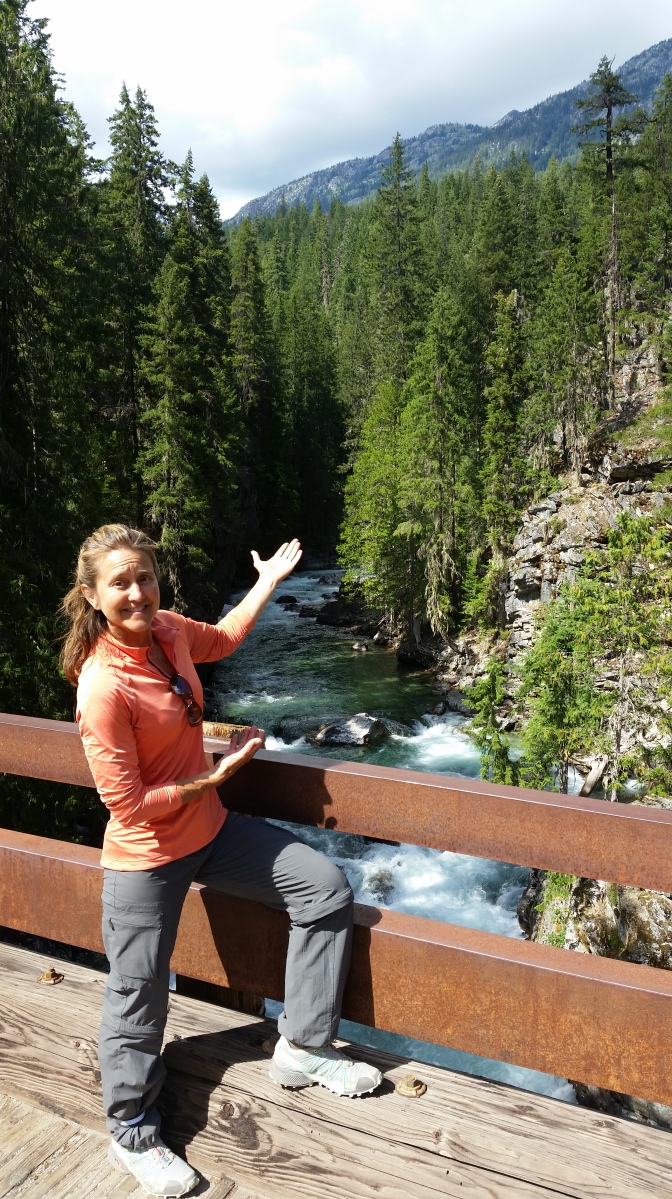 On the ride we were able to stop at an impressive waterfall about 3 miles north of Stehekin, Rainbow Falls. 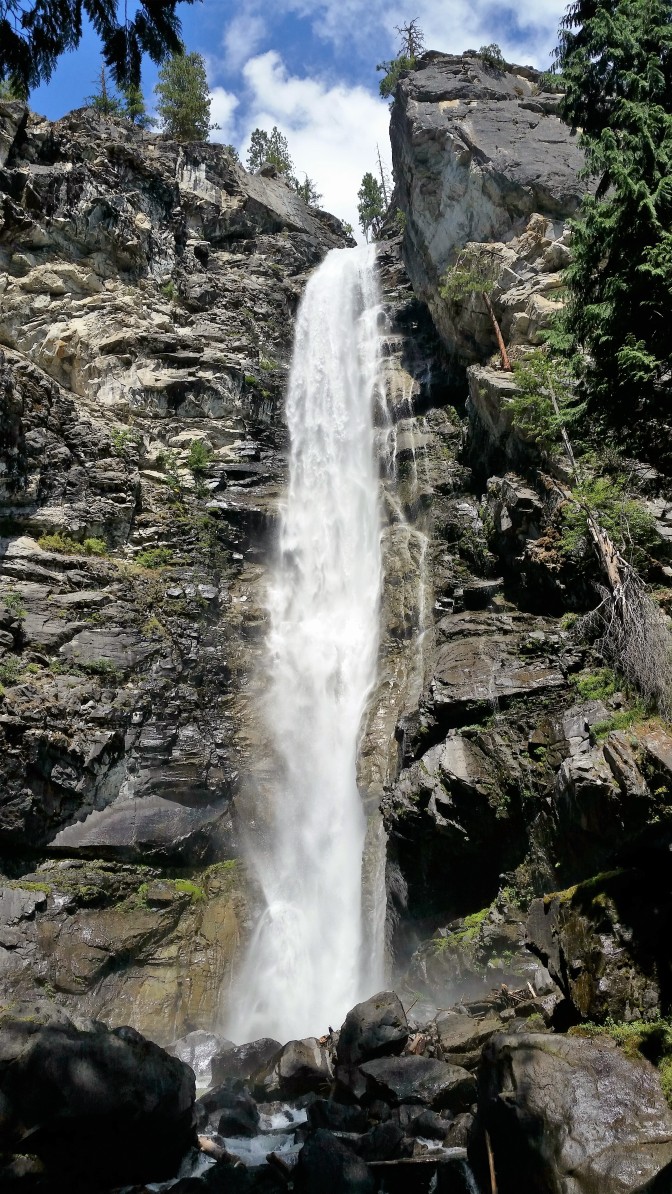 There was also a large Western Red Cedar tree at the base of the falls.  I can’t help but admire these massive trees.  This one was almost 200 feet tall. 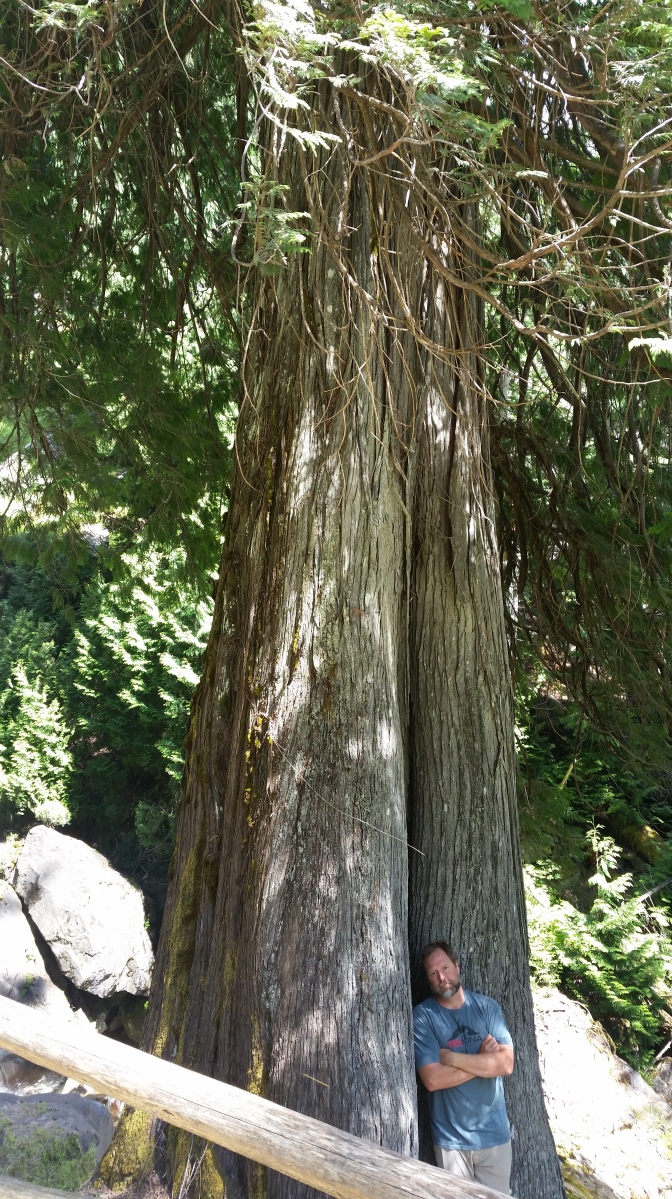 We got back to our campsite late in the evening but still daylight.  I was not looking forward to dehydrated beef stroganoff so we walked down to North Cascades Lodge to see if they were still serving.  Our 1st bit of luck for the day! They were open.  We celebrated with a nice meal.  I had bacon wrapped meatloaf with a blackberry bar-b-q sauce, mashed potatoes, and green beans, delicious.  This is living!  A solid day of adventure with a gourmet meal at the end, this is what the hiatus is all about.

The next day as we were packing up our tent and preparing to leave, the ranger came by to evacuate the area because of a major storm moving in.  The campground was in a flash flood plain.  I guess Stehekin was telling us it was time to leave. 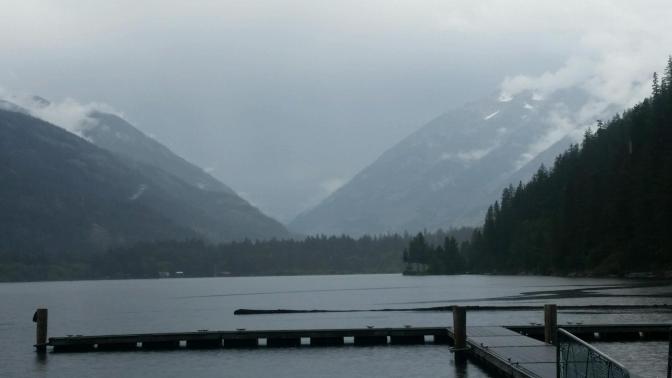