From my 1st glimpse of Crater Lake, I had the urge get down to lake to touch the water.  Maybe it is a Minnesota thing.  I’ve spent the majority of my life in the ‘land of 10,000 lakes’ and it’s become a habit.  Every lake I visit, which has been many, I must go to the shoreline and dip my fingers or toes into the water.  With Crater Lake the urge was more like a compulsion.  I had to touch the purest blue water my eyes have ever seen.

Crater Lake is defined and guarded by the 700 to 1000 foot caldera walls.  Hiking, climbing, scrambling, sliding, or falling down to the lake’s surface is prohibited by the National Park Service (NPS).  But there is one approved passage down to the water, the Cleetwood Cove trail.  It is 1.1 miles long and drops 700 feet to the surface of the lake.  At Cleetwood Cove the NPS offers guided boat tours.

I highly recommend spending the $57 per ticket to take the Wizard Island tour.  This tour allows a chance to spend time exploring the island and give a ranger guided boat tour of lake.  Only two Wizard Island tours leave daily during the summer each has only 37 seats available.  18 of the seats can be booked in advance, and fill up many months in advance.  The other 19 seats become available exactly 24 hours to the minute prior to the tour and can be purchased at kiosks in the Rim Village.  The tour is a high demand event so to have a chance for tickets you must be prompt at the kiosk.  It took us 3 attempts to secure two seats.

The Wizard Island tour leaves Cleetwood Cove and motors directly to the Island for a three hour tour… a three hour tour.   When the boat returns, it continues with a 2 hour tour, ranger narrated ride circling the entire lake.  We loaded our backpacks with lunch, fishing gear, and warm clothes, to be prepared to take full advantage of the day’s activities.

Wizard Island has only two maintained hiking trails, Wizard Summit and Fumarole Bay.  The NPS also allows fishing and swimming, if inclined.  We wanted to experience all of the above.  The NPS estimated 1 hour for the summit hike, 1-1/2 hours for the bay hike theoretically leaving only ½ hour to fish or swim.  We wanted to make the most of our time, so once the boat dropped us on the island we made a bee line for the summit trail.  We hustled up 1.1 mile switchback trail up the 760 foot tall cinder cone.

Wizard Island emerged from the caldera floor in a geologic event hundreds of years after the mountain’s initial collapse and rises from the floor of the lake.  We walked the short trail that circumnavigates the rim.

We dropped into the base of the crater.

We rapidly hiked down the cinder cone and proceeded to the Fumarole bay trail.

We quickly covered the distance, under a mile, to the end of the trail.  We completed both trails in under an hour and a half.  This is where I prepared to try my luck fishing.

No license is required to fish Crater Lake and there are no limits.  You can catch and keep any size, any species and any number of fish.  The only restrictions are you must catch them with artificial lures and if you are going to keep them, you must pack the whole fish out to the rim.  This means anglers are not allowed to fillet the fish at the lake and leave the guts behind.  I asked a couple of cove employees for fishing tips like fishing spots, types of lures, and advice on how to cast and retrieve.  They simply said any spoon or spinner bait, anyhow, anywhere, anytime.  It sounded great to me and I was looking forward to a fresh fish dinner from one of the cleanest lakes in the world. 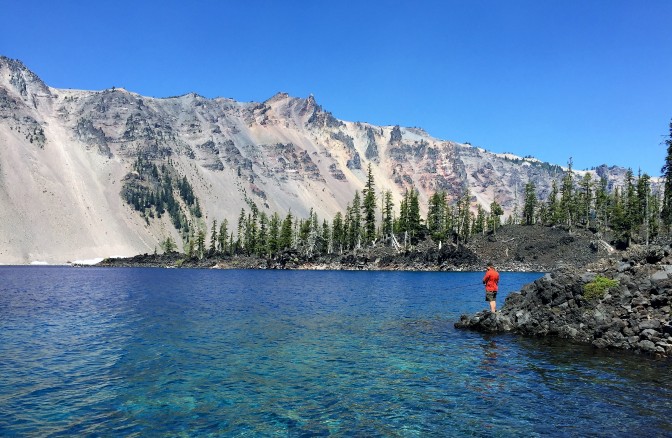 Only two species have survived from stocking attempts that took place in the late 1800’s and early 1900’s, rainbow trout and kokanee salmon.  I cast in Fumarole Bay for about 30 minutes without a single nibble.  I changed lures a couple of times and moved around the shore to try different spots, but my results were the same, not even one bite.  My fresh fish dinner turned into macaroni and cheese.

We arrived at the dock a few minutes before the boat arrived so Vickie figured we had enough time for a quick dip.  I was skeptical so I said, “Okay, you go first.”  We had dipped our feet in the water and I knew how cold it was, so I was hoping she would reconsider the idea and decide not to go in.  That way I could be spared from having to ‘man-up’ and jump into the cold water just to prove I was at least as tough as my wife.  That is if I didn’t want to take a hit to my ego.    She didn’t reconsider.

Vickie gracefully dived in.  When I asked her how the water was, she bald-faced lied to me and said “refreshing”.  I mustered up the will and flopped into the frigid water.  It was the beginning of August and the water temperature was the warmest it was going to get all year.  Even so, it was only in the upper 50’s (degrees F).  “Refreshing” wasn’t the word that came to my mind.

We climbed out and hopped into the boat to drip dry and to finish the 2 hour lake tour.  The tour involved motoring around the lake to get a close look at the physical features while the park ranger explained the geologic history.  In my opinion, one of the most unusual sight is ‘The Old Man of the Lake’.  The ‘Old Man’ is actually a 350 year old pine tree that fell into the lake at least 120 years ago.

The tree was actually documented floating 120 years ago for the 1st time, but it is unknown how long it has actually been floating before then.  I found it interesting that the ‘Old Man’ hasn’t yet become water-logged or decomposed enough to sink after 120 years.

The captain stopped the boat in the middle of the lake to allow us to taste the water directly from the lake and refill our water bottles.  The water was clear, pure and tasty.  As we were travelling from one feature to another, the ranger noticed my fishing pole strapped to the outside of the backpack and asked, “How did you do?”

He asked, “Where did you fish?”

“Fumarole Bay.”  Then I mistakenly asked, “Has anybody else been catching anything?”

The ranger asked the captain, “What have you heard about fishing?”

The captain replied, “It’s been great as always.”

The ranger asked me “What did you use?”

I replied, “A doctor spoon first, then a Mepps spinner, and finally a Daredevil.”

“Hmmm, that should have worked.”

The captain asked, “Have you ever fished before?”

The ranger asked, “Were you actually trying to catch fish?”

The captain asked,” Did you actually cast the lure in the water?”

The ranger said, “Do you know what fish look like?”

They went on to describe how they had to ‘throw’ fish out of the boat that had accidentally jumped into the boat.  And how they could just stick their face in the water and come out with one wriggling in their teeth.  Sometimes they would just lasso a few fish, turn off the motor, and let them drag the boat around the lake….to save fuel of course.

I wisely distracted them by pointing out, “Wow, it looks like Wizard Island is erupting!”

From the angle we were looking at Wizard Island, with the ongoing forest fire in the background, it looked like it might actually be erupting.  The captain stopped the boat for at this angle to allow everyone to take pictures before we headed back to the landing.

The day spent at Wizard Island was the highlight of our visit to Crater Lake.  We viewed the perspective from lake level; hiked to the summit of Wizard volcano;  we swam in the invigorating water; and we tasted the lake’s purity.  The only thing that could have made it more complete was if I could have caught a fish.  I guess I will have to try again on our next visit.  Maybe then I will try the method the ranger suggested and put my face in the water like a bear and try to catch one in my teeth.

PS.  Here are some other questions I had and the answers the ranger gave me.

Question:  Does the lake ever freeze?

Answer:  Not since 1949.  Average water temperatures range from 39 degrees F for most of the winter to a high of around 59 degrees F at the peak of summer.