Great Basin National Park encompasses a desert mountain island on the eastern edge of Nevada, translation – the middle of nowhere.  The nearest town is Baker, population 68.  We arrived in early June for our park visit and decided to stay high on the mountain at the Wheeler Peak campground at 10,000 feet.   The weather had warmed up just enough for the campground to open a few days before we arrived.  During the day the temperature rose into the 60’s, but at night it dropped to just above freezing.  The park was a unique mix of high altitude hikes and cave tours and it was unexpectedly interesting.  We also experienced Nevada rednecks for the 1st time.

On the afternoon we arrived, we walked the 2.7 mile Alpine Lakes Loop (10,000 feet) to acclimatize.  Snow persisted in the shady areas between the white bark pines.  Ground vegetation was beginning to come to life in places where the snow had melted away from the direct rays of high altitude sun.  We hiked past two picturesque classic sub-alpine lakes, Stella & Teresa.  These sub-alpine ladies are characterized by cold clear water supplied by the melting snow in the basin.  Their shore defined by rock and gravel broken from the mountain slopes that surround them.  Remnants of trees that perished long ago still litter the shore.  The growing season is so short even the microorganisms don’t have enough time to efficiently decompose fallen debris in the harsh conditions.

Wildlife had already migrated back up to high altitude to take advantage of the fresh forage provided.  We spotted a mule deer and flock of wild turkeys, who just casually observed us and went about their normal business.

We watched them graze for a while then, continued our hike around the lakes.  We walked through a stand of Bristlecone pines.  Bristlecone pines are among the oldest living trees in the world.  The trees we walked through are estimated to be between 2000 and 3000 years old.  To bring that into perspective, these trees have been growing since before the birth of Christ walked the earth.  It’s ironic that in this harsh mountain environment, with an ultra short growing season, bristlecone pines live so long.  In fact, the closer to tree line (the altitude where the environment is too harsh for trees to grow), the older the trees tend to be.  Scientist attribute the longevity to the high resign content of the trunk which prevents it from rotting. 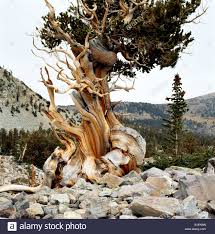 We stayed until the sun started to set.  There aren’t any streetlights and no ambient city lights, so once the sun is gone, unless there is a bright moon, it gets dark…pitch dark.  This, along with the high altitude and pure air quality (particles and pollution) make it an ideal place to view the nighttime sky.  You can actually see so many stars in the Milky Way that it actually looks….Milky.  The park service agrees and funds have been raised to build the Great Basin Observatory for astronomical research.

The temperature drops with the sun and the cold takes hold quickly.  It is a place that only the heartiest of organisms can adapt to persist year round.  The rest of us are just temporary, fair weather visitors.  We made it back to our campsite for dinner, a warming fire, and to plan our next two days. 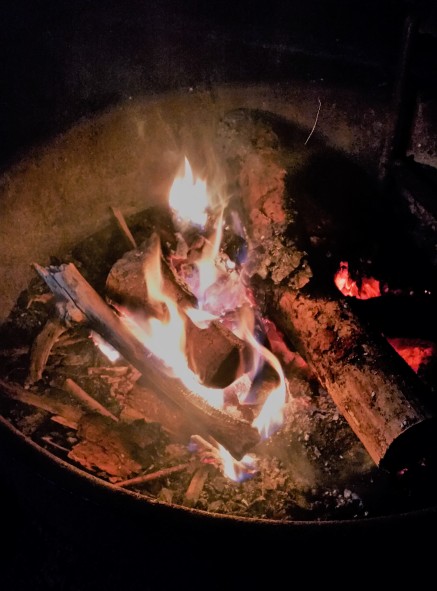 The next day we decided to hike to the summit of Wheeler Peak, an 8.2 mile round trip up over 3000 vertical feet.  The trail began in a conifer forest and led up through dwarfed and deformed aspens.    I can only speculate what harsh conditions contributed to why these trees didn’t grow with straight trunks like normal aspens.  My guess would have something to do with the sapling trees damaged by snow or ice in the winter.

Even though it was June, as we climbed higher through the trees we encountered more snow.  In places where the snow had been blown thin by the wind, it had melted away and the worn dirt trail was obvious.  In places where drifts collected, the snow was still deep and the trail was obscured.  The higher we hiked, the more difficult it became to follow.  We eventually reverted to common sense route finding, when attempting to reach a summit, just go up!  Vickie was able to walk across the hard crust on top of melting snowdrifts, but I would periodically break through, post-holing to my mid-thigh as I attempted to cross.  I decided to weave though the trees making my own trail that avoided deep drifts.  When we crossed above tree-line, the wind had blown the snow off the trail and the sun had melted the rest.  As we continued up the switch-backed trail on the ridge, we encountered wind in excess of 40 MPH.

The wind pushed us around as we ascended.  We were forced to walk wide legged for stability like a Fat Tuesday partier staggering down Bourbon Street at midnight.  Around 800 feet below the summit, because of the high winds, we debated aborting the hike so one of us wouldn’t get blown down the mountain and deposited onto the rocks below.  We elected to continue up for another 15 minutes and then reassess the conditions.  The trail passed behind the ridge and provided us the wind block we wanted.  The rest of the hike was protected so the final push to the summit went quickly and safely.  Although it seemed to take much longer, the entire hike to the summit took us only three hours.

We took a half hour lunch in the rock shelter and basked in the sunshine.  Behind the rock wall out and of the wind it felt like a warm summer day, T-shirt weather.   There were a few other hikers who braved the wind to get to the summit.  One of them, Bill, who was also on a hiatus like us and lived in a sprinter van similar to ours.  I thought we were the only crazy ones.   Shout out to Bill!  He agreed to take a picture of our celebration.

The trip down the mountain went much faster than the trek up, but when we left the protection behind the ridge-line, we found the wind had increased.   The gusts blasted us at up to 50 MPH.  We hunched over for aerodynamics and plodded on.  To dramatize the power of the wind, I stood facing the wind with my arms at my side and my hands cupping the wind like an Olympic ski jumper.  I was able to lean 35 degrees into the wind without falling on my face.    We struggled with the wind until we reached the tree line.  From there, it was straight down, plunge stepping through the snow.  We made it down the mountain in only two hours.

On our final full day in the park we took a tour of Lehman Cave.  The cave has the traditional calcite cave features like stalactites, stalagmites, columns, and draperies, but it is known for its much rarer shield formations. 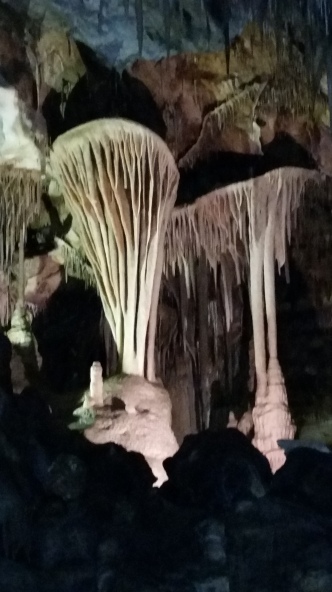 Here is the time in the blog where I feel the need to address cave etiquette, because Lehman caves was the place where we witnessed the worst of our national park visitors. Vickie and I have toured many caves during our travels and the most important rules are pretty much all the same everywhere you go.

We had only one Park Ranger to give our tour so she asked for a volunteer to follow last to help keep the group relatively together and assure that no one would get lost.  Our “gracious” volunteer, bringing up the rear, took every opportunity to touch everything he could reach and we even caught him sitting down to rest on formations.   I assumed resting wasn’t necessary for him because he was wearing a New England marathon T-shirt.  In retrospect, I regret I didn’t take a picture of him so I could post it here.

The second rule of cave etiquette:

Okay it’s really an unwritten rule…….but it’s still a good one.  A family of Nevada rednecks broke this rule on the cave tour.  The group stood out to me because they all wore camouflage as a fashion statement.  Their camouflage worn head to toe was jungle green with fluorescent pink highlights for the females, neon green or blaze orange for the males.  The clothes were all new and bright.  With them they wore bright white sneakers or penny loafers and no socks.  They weren’t dressed like the hunters I normally see in camo, with worn faded Realtree camo patterns and rugged dirt covered boots.  These folks looked like they put on their ‘Sunday best’ camo to go to a fancy dinner at Shoney’s before they attended a Larry-the Cable Guy comedy tour, “git-r-done!”

Before the cave tour, the ranger went around and asked each group where they were from and what their favorite national park was.  I said Minnesota, and the Grand Teton national park.  The redneck Father grunted, “Nevada” and,  ”I dunno, Great Basin I guess, though we just got here and ain’t seen nuthin’ yet.”  The coup de gras was in the final tunnel to exit the cave, when the father dropped the ultimate bomb.  It echoed in the tunnel.  It smelled like a dirty diaper overflowing from a sick baby feed couscous; Like an overflowing port-a-potty on the last day of the Minnesota state fair; Like standing in raw human sewage on a sweltering summer day; Like something had crawled up inside the guy and died.  Tourists were gagging and covering their mouths.  We were required to wait in the tunnel until our “gracious” volunteer, Mr. Touchy, caught up to the group so the ranger could confirm “no man left behind” and opened the escape door.  We put our heads down and sprinted out into the fresh air.  Once outside, the ranger had to prop the door open to allow the odor to diffuse out of the tunnel.  She said, “I wouldn’t want to subject the next group to that kind of torture.”

Even though we had a bad experience with our fellow visitors in the cave, the tour was interesting and beautiful and ranger was informative and passionate.  It was worth the time and money spent.

Overall we were pleasantly surprised with Great Basin National Park. It is remote, un-crowded (only around 100,000 visitors each year), and diverse.  With Wheeler Peak, Lehman Cave, stargazing, and hikes, Great Basin is a pleasant mountain oasis.